Tokens as an Asset Class 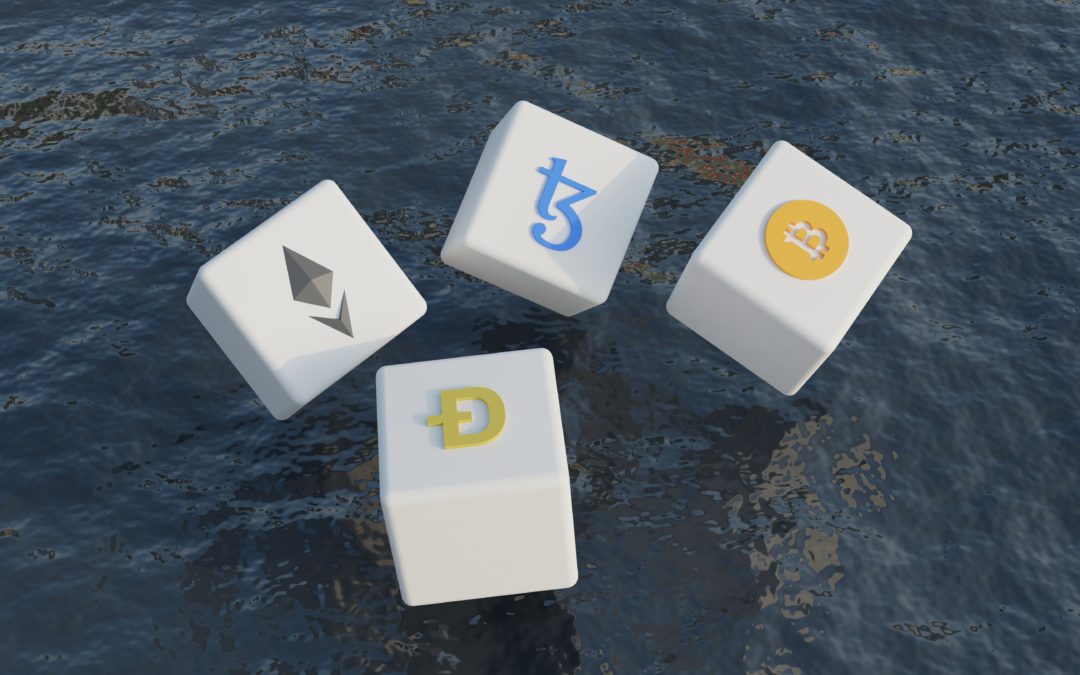 (Crypto-)Tokens are not a homogeneous asset class. They can and should be distinguished based on their functional characteristics. We have tokens that are very similar to commodities in their purpose, tokens that have equity-like characteristics, tokens with a profile similar to that of intellectual property (IP) rights, etc. Next to a plethora of technically worthless projects, there are very sophisticated and perfectly legitimate blockchain-based businesses (from transaction processors to oracle networks) with real prospects to become established and large commercial enterprises, but of a different nature compared to what we are used to in terms of traditional asset classes. A key determinant for the success of promising crypto projects will be the evolving regulatory landscape. Financial regulators in several countries have taken relatively supportive steps, think of our Swiss FINMA. Challenges (and therefore risks) at global level remain for example with respect to the treatment of Decentralised Autonomous Organisations (DAOs) a key and at the same time complex actor in the decentralised world.

Note: the discussion that follows is by no means advice to invest, buy or sell tokens or other assets.

The “Game Changer” mantra is a dangerous one, as it leads to euphoria and unreasonable valuations. Nevertheless, the potential for distributed technologies is not only confined to financial transaction infrastructure, it extends to financial services built on top of that infrastructure, as well as social media, digital art and IP, and big data analytics, to mention some. Big data is an interesting area: blockchain technologies, thanks to cryptographic proofs, may encourage the (cryptographically guaranteed) sharing of data and generate a larger amount of easily accessible and analysable data, increasing the chances of breakthrough scientific discoveries – if we only focus on the positive side, of course.

The speed of innovation and the uncertainties linked to blockchain and Web3.0 business models, as well as their risks, are very significant. At the same time the success of Web3.0, while not certain, poses a significant risk to some of the current leaders of Web2.0 whose business models may be turned upside down when moving from centralisation to decentralisation. There is an inverse dependence between the success of a decentralised system and the success of certain existing business models, think of borrowing and lending or social media content monetisation. People do not generally have an economic incentive to post content on a social media platform. Even if they own shares in the social media company, the economic interest is very indirect and diluted and the control centralised away from the user. Decentralised platforms with NFT functionality give users an option to monetise their content and can, depending on the design, give users direct control. This radically changes the business model so far used by some social media giants.

One major innovation provided by tokens is that they give individuals and companies an incentive to adopt the tokens’ protocols, as everyone holding such tokens would profit from strongly growing usage. This is in some cases a game changer because it aligns the economic interest of users and platform developers. The SWIFT payment infrastructure is controlled by global banks. Bank customers have no economic interest in using that infrastructure compared to other hypothetical alternatives. Ethereum (or other Layer 1 and 2 solutions) can be economically owned by anyone through tokens, so if Ethereum grows and improves, there is an economic alignment between the success of the platform and potential revaluation of the tokens held.

Capitalism provides an economic alignment as long as people hold significant amounts of equity in the broader economic system. For example, by having our pension assets invested in global markets by pension funds (e.g. second pillar in Switzerland), we have some interest alignment with global corporates. Tokens are a different way of aligning interest.

Since it is easier to buy tokens compared to shares in a start-up or generally private company, it is also easier to buy something overpriced or outright worthless. That is why there needs to be a strong fundamental understanding of the economics behind a crypto project. Another issue is that blockchain technologies and Web3, despite the strong growth seen in the last few years, are still at a very early stage. As someone said, crypto is overestimated by insiders, and underestimated by outsiders. It will likely play an important role in the future of the web and data overall, which is underestimated by the public, but today’s applications are still just proofs of concept. Sometimes they are highly sophisticated ones, but there is a long way to go and there are significant regulatory uncertainties that will also affect the growth path followed by the new era of internet, data and cryptography.

Just as we need gas to heat houses, gasoline to run an engine, or money to pay for services, blockchains require certain specific (generally “native”) tokens in order to pay for the validation of transactions. When one uses the Ethereum blockchain, “gas fees” have to be paid, so one needs to buy Ether (ETH) in order to pay such fees. Similarly, many other blockchains work this way and their tokens are nothing else than digital commodities needed to operate a cryptographic, distributed ledger system.

While we are generally used to pay in fiat currencies like the Swiss Franc or Euro for the services we purchase, the current blockchain systems require payment in tokens. There is nothing strange, frankly, but at the same time the price of these tokens can vary a lot based on supply and demand dynamics. While it may seem very different from what we are used to, we should keep in mind that often transactions (think of stock trades, credit card payment processing, etc.) are paid based on a percentage fee. This means that the larger the transaction, the larger the cost. There is significant variability! In a blockchain like Ethereum, the transaction cost is relatively stable in terms of ETH (gwei) but can spike when there is congestion of the system and users have to bid up in order to get their transactions processed. It is similar to the mechanism of electricity markets.

Bitcoin and Ethereum are the two most well-known Layer 1 platforms, many others exist, be it Layer 1 or Layer 2 scalability solutions. The other most popular ones being Solana, Polygon, etc. In these cases, the key fundamental value driver is the adoption of the blockchain leading to a surge in demand, also relative to the supply, often capped and scheduled.

The commodity nature of these tokens should lead us to analyse the price elasticity of a token, from an economic point of view.

If a platform adds significant value to its users (e.g. thanks to flexible and robust smart contract functionality), demand may be rather inelastic, while if the platform itself is commoditised and the key driver for adoption is transaction cost, we reach a point at which token prices are simply too high, which in turn leads to demand destruction.

Certain tokens entitle holders to revenues such as protocol fees. There are different mechanisms to have such revenues flow to token holders, sharing similarities but also differences with traditional equities, i.e. stocks of a company that entitled holders to dividends.

Staking is the process based on which validators allocate capital in order to validate transactions. They provide a service and are rewarded with tokens. In this sense, staking is a service requiring a temporary capital investment. Different from passively holding shares in a company. Many crypto investors however do not truly stake (in the sense of validating transaction) but delegate the staking to a specialised provider, who keeps a share of the staking rewards. That is closer indeed to an equity-like investment, as investors allocate capital to a for-profit business and share the risks and profits. Because staking is done with the same tokens used to pay for transaction fees, staking is a combination of equity-like and commodity risks and rewards.

Certain protocols, especially in Decentralised Finance (DeFi), earn fees such as exchange transaction/swap fees and lending interest fees. Some protocols accrue these fees in their protocol reserves, some use them to burn tokens in a mechanism very similar to share buy-backs. Especially the latter case exhibits equity-like characteristics, also taking governance rights into consideration. An example (not a recommendation) is Maker with its MKR token.

The tokens described above do not have predominant commodity-like characteristics, as their value resides mostly in the voting rights and the control on fee-sharing mechanisms that such rights provide. Hence, certain tokens can be analysed with approaches similar to those used for early-stage companies. More art than science, but one can at least make educated guesses about potential market sizes and analyse the competitive position and threats for a certain protocol.

Parameters that need to be considered when assessing these types of tokens include: 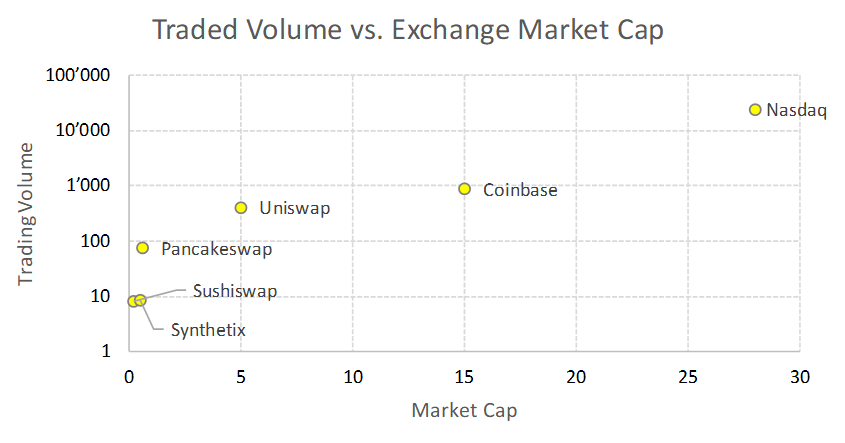 The economics are not only driven by sector growth. The chart below shows in a very simplified way one of the differences between different types of exchanges. Far from being the only or best metric, the relationship between trading volumes and revenues for the business is thought-provoking. Volumes and profitability are two very different things. A fundamental analysis of the potential future pricing power becomes essential. 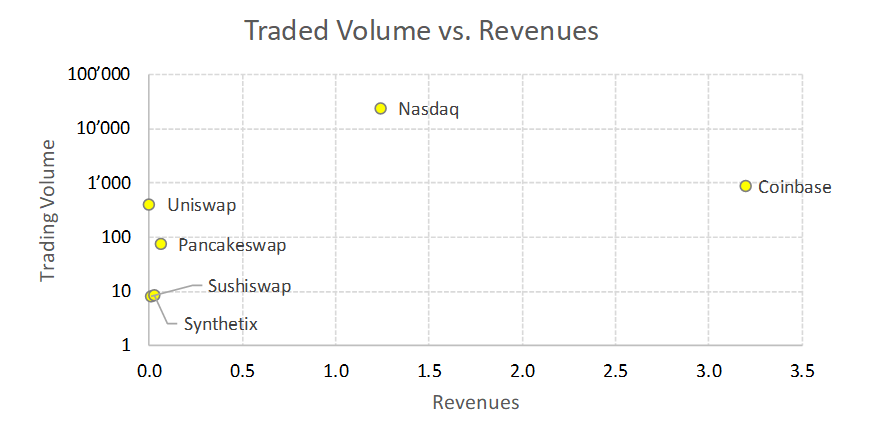 Certain protocols do not currently foresee fee sharing mechanisms in favour of token holders. They may, and some are expected to implement them at some point, but their tokens provide almost exclusively governance rights. In a sense, these tokens are akin to IP rights linked to the protocol’s technology and code – it could be monetizable, and holders have to decide what to do with this intellectual property.

In order to value such tokens, several assumptions have to be made, like the probability that holders will vote in favour of activating fee sharing, the impact that (potentially higher) fees will have on protocol usage. On top of all the other assumptions that have to be made for equity-like tokens.

Ultimately, the fundamental value of IP-like tokens is the expectation that they will become equity-like tokens.

A large part of the market, if not the majority of tokens, is made of garbage-like tokens. Several if not all meme coins would fall into this category. A sub-category of garbage-like coins is the fraudulent tokens category, where it is not even a joke, but an outright fraud. While some are absolutely evident jokes or scams, others require attention and due diligence.

Many crypto projects try to convince investors by highlighting a (more or less real) problem that they are solving and by claiming superiority vs. incumbents based on some metrics (like transaction cost, transaction speed, etc.). Trusting numbers on a project’s website or on a pitch-deck is clearly not a real due diligence.

Just as is the case with companies, it is important to know who is behind the company and how aligned interests are among developers, project initiators, users and the public (potentially) investing in a token.

For investors and financial professionals based in Switzerland and Europe, Qortex offers an e-learning course on blockchains covering investment, risk management and regulatory subjects. Here is the link.